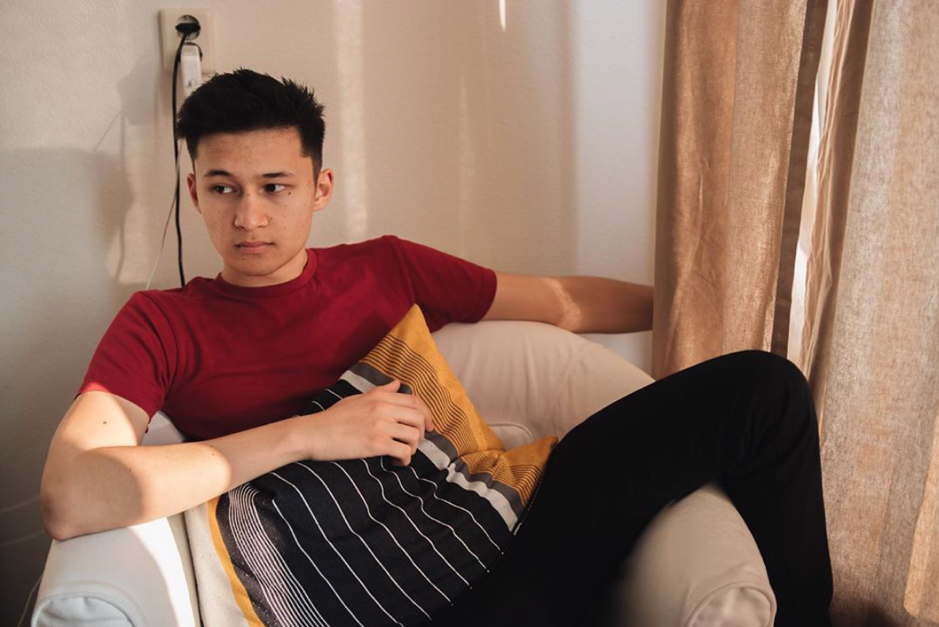 IBCoM is notoriously known for its diverse pool of creatives. One tutorial group only could consist of a songwriter, a YouTuber, an audio engineer and an eloquent dream student. Very rarely, however, do we see all of those talents come together in one human being.

Samuel Vitikainen (or Sam) is the embodiment of such a phenomenon. It’s therefore admirable for someone with such a respectable resume to be as humble and reflexive.

Sam and I casually sat down at the stairs of Polak in between some work meetings of his – He had just wrapped the recording of a podcast for the Sustainability Hub and he had an array of other things planned for the day. For him to then arrive at the interview with a tripod in his left hand and a bag full of recording equipment in the other, just attests to the busy life of this human of IBCoM.

When asked the question “What do you do?”, a short moment of silence was followed by a flood of professional and artistic endeavors. Sam works for Mijke Slot’s research podcast Klikt het? (translation: does it click?), where he is in charge of all the audio. He also runs a production company with his friend Buzzell, through which they (for the most part) make YouTube videos recapping each month of the year with the use of creative storytelling and fun sketches. “Buzzell asked me to help them with a project for the IBCoMagazine, and it just kind of grew from there”. Besides all of this, he also enjoys writing songs on his guitar and experimenting with beats on his trustworthy DAW Ableton.

The IBCoM Award winning-artist recognizes the opportunities to productively collaborate and learn from peers within the environment of IBCoM and its powers to further motivate when creating becomes too hard. “I do recommend to really sit one hour a day to study your craft. I study YouTube videos about audio. However, it is always helpful to have friends or other acquaintances that can hold you accountable.”

For someone who has that much going on, Sam does not seem to shy away from time restrictions. If anything, he actively tries to put himself in environments which such temporal constraints. “I remember one Open Stage Night that I really flunked. I did, but it was great because I learned from it. [..] throwing myself into situations with deadlines allows me to learn and become better. It humbles you. It’s kind of like: “This is who you are with the time frame that you have”. As a creative, you always feel like you can be great; Which I don’t doubt. What it is though, is that it takes time.”

A guide to productivity during online education

Racing against the clock is not something he does for the fun of it, but to teach yourself to also let go after creating something, For artists, it can be all too easy to stay stuck in the circle of never completing a project as it might never be good enough. Sam actively recognizes that and chooses to challenge himself to not get stuck in this cycle.

As expected, he does not create the art to gain the recognition of the awards. The importance of them lies in the assurance it provides that he is on the right path with what he is doing. “[..] That’s why I think finishing something is so important. It’s a way for you to look back and say I did that. So, such physical rewards like the IBCoM awards are a reminder that the art is valued and that you should keep sharing it. It’s a milestone, it’s the manifestation of finality.”

You can watch Sam and Buzzell’s latest video with the link below.

Humans of IBCoM: On the road to mindfulness, featuring Bini Jammeh

Citizen of the World: Humans of IBCoM with Emma Tanago